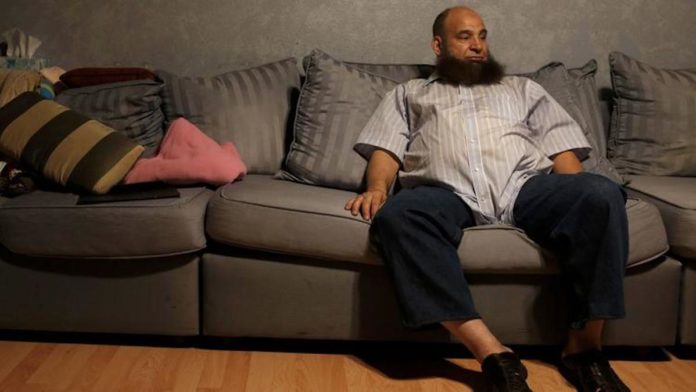 Mohamed Bzeek is known for more than his soft voice and kind smile, but more so for his huge heart.

He has been fostering terminally ill children for many years now, including the girl under his care now. The 6-year-old quadriplegic is blind, deaf, and suffers from a rare brain disorder known as encephalocele. Her identity is protected by confidentiality laws.

She was born with a small hole in her skull which allowed a portion of her developing brain to push out. Doctors had to remove the brain tissue, but her brain is not developing further.  These conditions have left her with a head too small for her body, which is too small for her age as it is.

This does not deter Mohamed. He and his then wife, Dawn, have been fostering children since she first introduced him to it in the late 1980s. Together they opened their home to dozens of children.

They dedicated their lives to teaching the difficulties of foster parenting and handling the illness and death of a foster child. Dawn was so well-renowned for her foster work that she was called upon to serve on statewide task forces alongside doctors and officials to improve foster care.

By the mid-1990’s Mohamed and Dawn decided to focus their foster parenting on terminally ill children. The next several years held joy and sadness for the couple. They shared the birth of their biological son, Adam, in 1997.

Adam was born with a brittle bone disease and dwarfism. The former disease made him so fragile that even changing his diaper put him at extreme risk of fracturing his bones.

He has grown up to be 19 now and although he is a mere 65 pounds, nothing can stop him at life as he studies computer science at Citrus College.

The early 2000s brought more difficulty for the Bzeeks when Dawn fell ill. Years wore on the family as powerful seizures would leave her weak for days, keeping her tied to the house out of fear that she would collapse in public.

The stress from complications with her illness added tension to the Bzeeks relationship until Mohamed and Dawn split in 2013. She died just barely over a year later.

Mohamed still tears up when he talks about his wife. He loved that woman and she taught him to love the children he fosters. She was always the strong one when it came to difficulties in the kid’s illnesses or their death.

But he presses on now, an older and wiser man. His big bushy beard, soft voice, and gentle eyes give serenity to anyone in his presence.

Those eyes look with nothing but love at the little girl he is taking care of. He takes her to the hospital regularly for check ups with Dr. Suzanne Roberts, who serves as the girl’s pediatrician at Children’s Hospital in Los Angeles.

Mohamed is known well as the only foster parent in the county that will take in terminally ill children. Assistant regional administrator of the Department of Children and Family Services, Rosella Yousef, asked him to if he could take in another child, but he politely refused.

He wanted to focus on the girl in his care now. The pain of past losses has taught him to view death as a part of life, making the small joys all the more special.

Though she cannot hear, he still talks to her. He says she is still a human being despite her differences. She deserves human compassion and love.

“Her life is not complete suffering. She has moments where she’s enjoying herself and she’s pretty content,” Dr. Roberts said.

Please take a moment to SHARE Mohamed’s story. He defines what it really means to be a foster parent.