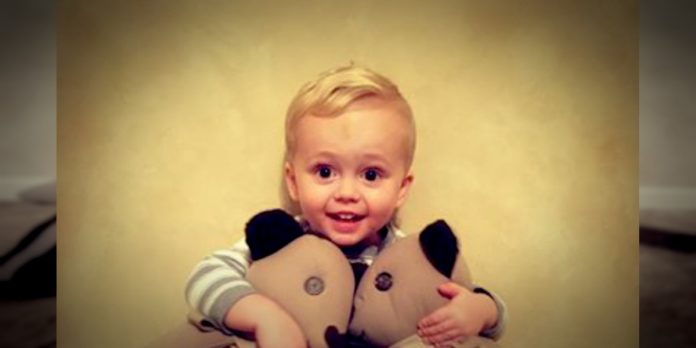 St. Louis County policeman Blake Snyder was killed in the line of duty on October 6, 2016, leaving behind his grieving wife, Elizabeth, and two-year-old son, Malachi. The 33-year-old had been a member of law enforcement for four years when he was killed instantly after being shot at point-blank range while responding to a disturbance call.

Just 10 days after Snyder was killed, Elizabeth went on social media and posted a video that offered clear evidence of how the tragedy had affected her and Malachi. However, she indicated that her will to go on was based on the presence of Malachi in her life, who she indicated had grown more attached to her in the days following his father’s murder.

That attachment was represented by Malachi’s increased need to cuddle with his mother, indicating a subtle effort on his part to make up for the loss of his father. Elizabeth also took the time to thank the many people who had either aided her in the days after the tragedy or had offered their condolences on behalf of Blake.

The Facebook page the message appeared on has drawn over 98,000 responses over the past year, though one individual who saw it went further. The wife of a police officer from Granite City, Illinois, who preferred to remain anonymous, got in touch with Thea Gain, the owner of Thea’s Blessing Bears.

Gain’s company creates teddy bears for customers and took a unique and poignant approach in creating a pair for Malachi. The two bears were created out of Blake’s police uniforms, with Gain indicating that it was a way to keep his memory alive for Elizabeth and especially Malachi. Once Malachi received the bears, Elizabeth posted a photo on Facebook of her son eagerly smiling while holding them.

These beautiful bears were made for us from Blake's uniforms❤️

Six months after Blake’s death his parents went to St. Anthony’s Hospital, where he was taken after being shot. Despite doctors and nurses being unable to save their son, Dick and Peggy Snyder wanted the opportunity to express their gratitude toward them and indicated how the visit was cathartic as they continued to deal with the loss of their son.

In August 2017, Blake’s hometown of Godfrey, Illinois, honored him by naming a stretch of State Route 100 after him. The portion of Great River Road was renamed the Officer Blake Snyder Memorial Highway. Prior to becoming a police officer, Blake had been a member of the town’s Parks Department.

Blake’s family attended the event, with Elizabeth indicating that even though Malachi was likely too young to grasp what took place, he’ll have a lasting memory of his father.

“But it’s going to be great when one day he can just know that everyone was there for him and his father,” Elizabeth said.

On the first anniversary of Blake’s death, the residents of the street where he was killed took time to recall his heroic efforts to protect them. Many ribbons and flags that honored Blake were still present on the street.