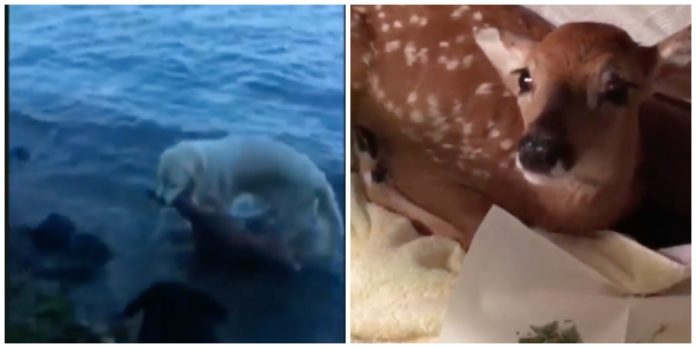 A Storm came to the rescue!

As Mark Freeley took a relaxing stroll on the shores of the Long Island Sound accompanied by his dog, Storm. Together they came across a peculiar sight.

A fawn was out in the water, hardly staying afloat.

Check out this incredible footage of Storm saving the poor deer

Storm brought the little deer to the shore and proceeded to carry it a few yards from the water. What he did next was simply adorable. Storm laid down next to the fawn, nudging it and pawing at it as if he is trying to revive it. You can just imagine him saying, “Hey buddy! Are you alright?”

This was only the first round, however. Freeley called wildlife experts as soon as the deer was out of the water, but just as they started to walk down the shore, it spooked and ran back into the water, going out even farther than before.

The humans took the lead in this operation for round two. Mark and Strong Island Rescue team member, Frank Floridia, waded out into the water to attempt a rescue. It proved to be a much more difficult proposition.

Floridia recounts, “The second rescue was a lot of anxiety. I don’t think I could’ve done it without the help of my partner. I was exhausted at this point, my knee was blown out, I had collapsed on the beach.”

His partner is Erica Kutzing, who ran about a mile along the beach to get into a position to assist the two men wading in the water. Upon Floridia bringing the animal to shore, she carried it to the safety of their van.

Kutzing said that the poor animal had an eye injury and was covered all over in ticks.

Now it is doing well in the animal rescue and resting up until it is strong enough to be released and on its own again.

Thanks to Storm for his bravery and compassion on the helpless creature. He is truly a good boy!