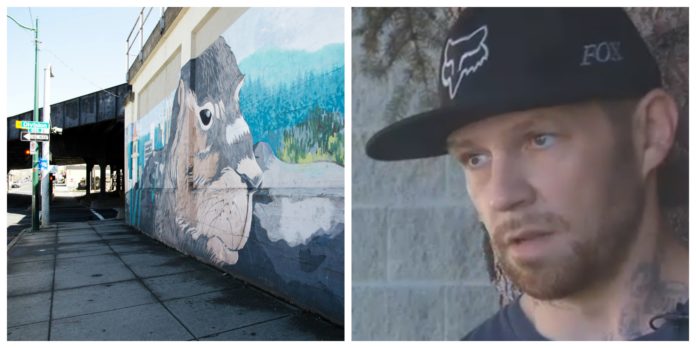 A Spokane, Washington man put aside his own problems for the lives of three strangers. If he hadn’t taken the time, a baby would not have survived.

Josh Tangehahl has been in prison for nearly two decades for manslaughter, but this night presented him with an opportunity to redeem himself.

As Tangehahl’s girlfriend drove him back from his work release, he noticed the time. He didn’t have more than a few minutes before his strictly enforced curfew.

“I looked at the time and was like man, I need to get back because if I’m not back, I’m going back to prison.”

A feeling churned in his gut that made him forget all about the time when he saw a car driving erratically in front of them. Josh watched as the vehicle sped past them, side-swiping the mirror of a car in the process. He told his girlfriend to follow it and before long, just as it reached an intersection out of sight, the pair heard it slam into another vehicle. An unmistakable sound of metal on metal impacting at speed.

“The car that hit it was probably going 50 or 60 mph through the intersection,” Tangehahl said.

He quickly responded by jumping from his car and charging towards the accident. He heard a baby crying but couldn’t see it. When he reached the van, he saw the mom pinned inside, the father hanging in and out, and a baby seat dislodged from the securements and hanging upside down.

Without hesitation, he rushed to the car seat to find the six-month-old baby partially out of its harness with the seat strap holding around its neck. “The seat was upside down so the baby was just hanging. It was terrifying, the baby was crying.”

He worked quickly, jumping into the sideways van and soon he had the baby free. He handed it off to a security guard standing nearby and proceeded to free the parents. 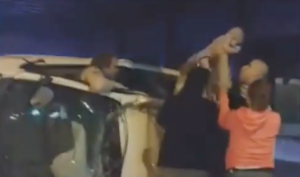 Witnesses lay claim to the heroism of this man who could have easily thought only of himself and ignored the situation in front of him. He says it’s all good though.

“I just reacted. I did what I thought was the right thing.”

Thanks to this unlikely hero, all three victims are expected to be okay!