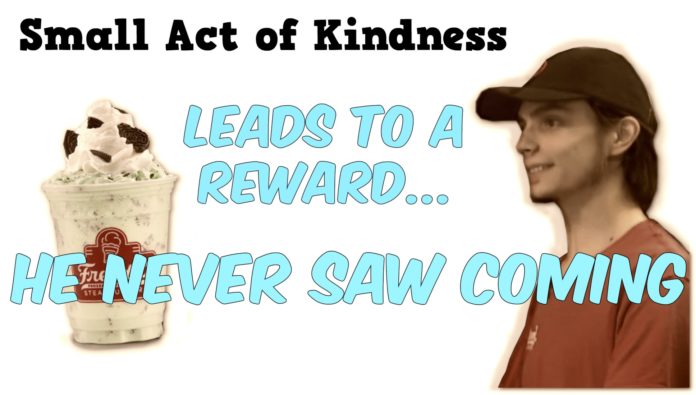 Customer service has become a game of chance. Do you take a chance and try to communicate your problems with someone who may not give a single care and just wants to go home?

The risk is that you may end up with fewer hairs than you started with because the person behind the counter or desk doesn’t want to deal with you, but somehow they are willing to expend the energy to make you feel worse.

That’s why people like Travis are very hard to find. Travis works behind the counter at Freddy’s Frozen Custard & Steakburgers. He spends his days taking orders and serving delicious treats to hungry customers.

He greets his customers with a smile and a soft voice. Just the kind of guy you want to take your order.

One day a young patron approached his counter with a desire for a Mint N’ Oreo custard. Unfortunately, the one thing the boy lacked was enough money to pay for the frozen treat.

He fidgeted around with a dollar and some change, clearly nervous as he feared the yummy dessert was just out of his reach. Finally, he just transferred all the money he had into Travis’ hands, but he was well shy of the total cost.

That’s when Travis saw an opportunity to make someones day with a simple kindness. He took out his own credit card and paid for the youngsters treat himself.

“It’s on me,” he told the wide eyed boy, who happily walked back to his mother’s table after receiving his sought after prize.

That may have been the end of this lovely little story. However, as the boy walked out with his mom, he handed Travis a note on the back of a receipt.

“Thank you for being so nice and paying for my concrete. We need more people like you.” the note read.

Travis could not help but smile for the rest of the day, the joy of giving and the privilege of receiving filling his soul with joy.

A $100 bill neatly rolled neatly inside the note served as an honorary reward for his good kindness.

Travis plans to put the gift away towards nursing school.

He would like to think that he made a good impact on their day, just like they did for him. Small acts of kindness that will do doubt be remembered for a long time to come.

So often we think that it’s the grandest acts or gifts that make someone’s day or even life. Let’s not forget that it is often the smallest move of selflessness that makes the biggest impression.

Has someone made a difference in your life with a small kindness? Let us know in the comments below and be sure to SHARE Travis’ story!