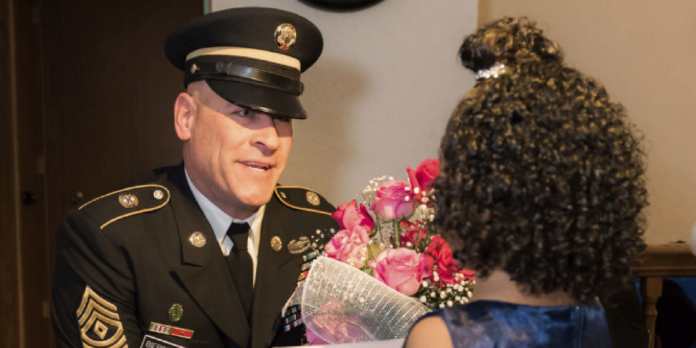 Going above and beyond an Illinois Army National Guard Soldier escorted a kindergartener to a father-daughter dance because her father died last year in a military training accident.

First Sgt. Jospeh Bierbrodt, of Sheridan Hills, with the 933rd Military Police Company, took 5-year-old Cayleigh Hinton to the dance in which girls from preschool through eighth grade were invited to bring their dad or “special man in their life.” 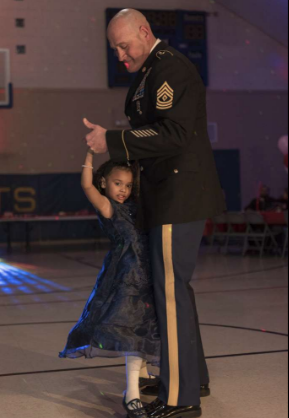 Beirbrodt, in full dress uniform, danced with the 5-year-old Cayleigh allowing her to stand on his polished shoes.

“i”m not much of a dancer, but Cayleigh has been practicing!”

Cayleigh, was  “daddy’s little girl” resulting in a really tough year for the family. This small act just made the little girl happy and smile from ear to ear.

Sgt. Terrence Hinton, the girl’s father, died in a training accident on May 14, 2017.  A military vehicle he was a passenger in spun out of control and overturned down an embankment.

He was a member of the Active Duty Army’s 3rd Brigade Combat Team, 25th Infantry Division in Oahu. Hinton enlisted in 2009 and served at Fort Campbell, Kentucky before moving to Hawaii in 2016. He deployed to Afghanistan in 2010 and Kuwait in 2014 for a total of 21 months.

“It wasn’t even really a choice for me. I view it as an honor to be able to do this for her”

Bierbrodt was lucky enough to escort his daughters to father daughter dances, and it’s something Cayleigh’s father had been excited to do. 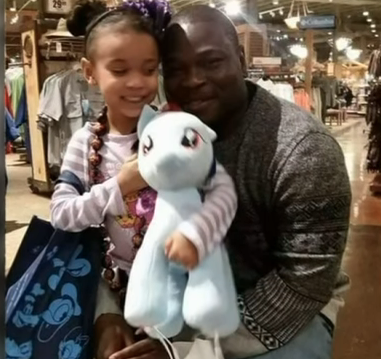 “He’s definitely here in spirit. I heard Cayleigh talking to him while she was getting ready, and I have no doubt she has him with her tonight,” said Jillian Hinton, Cayleigh’s mother.

Bierbrodt didn’t know Sgt. Terrence Hinton , but said he would want someone to do the same for his daughters if he wasn’t here.

Sgt. Bierbrodt went above and beyond the call of duty.  If you agree be sure to share with friends. 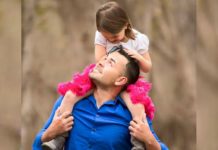 Stuttering Veteran Finds Relief During Special Time With His Daughter 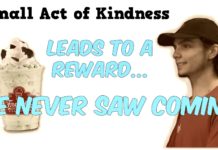 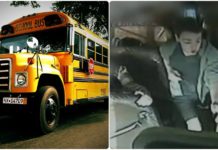 Scary Situation Arises When Boy Sees Driver Slumped Over, Jumps From Seat With A Scream