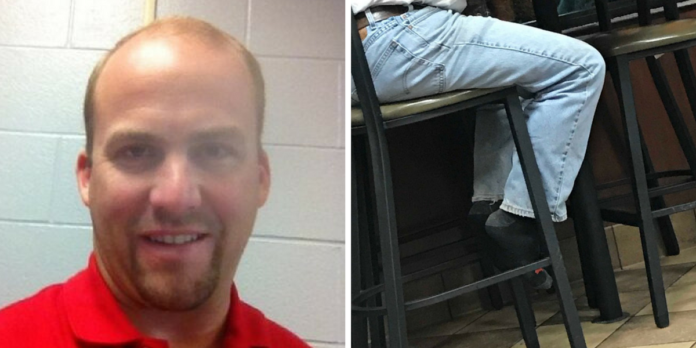 Kyle Cassady and his daughter Hallie were eating dinner at Chick Fil A when they noticed a man with duct tape holding his shoes together.

Apparently, they weren’t the only ones that noticed because an anonymous customer stopped the man in his tracks just as he was about to leave the restaurant. He felt like he had to do something because it was very cold.

He approached him and said was one word leaving the man in need astonished.

The customer walked up to him and said “Sir.” and the man responded by saying “Yes?”

The customer didn’t respond after that, he just looked at him in the eyes and no one expected the anonymous customer to take off his shoes at that very moment and give them to the man in need.

It just so happened that Hallie snapped a picture of the anonymous customer finishing his dinner in only his socks. Her dad posted it on Twitter later that night and it went viral.

Just witnessed an awesome act of kindness by this gentleman taking off his boots during his meal at the (BG) Chick-fil-A to give to a man in need with shoes that were being held together with duct tape. #truemeaningofChristmas#powerofgiving#stillgoodpeople#eatmorechikenpic.twitter.com/0eI2MW4xIi

Kyle was glad that his daughter got to witness this random act of kindness because it’s things like these that you don’t get to see every day. He says, “”As a parent, you always want good examples and role models for your kids.”

The world needs more people like this hero! His random act of kindness truly made a difference in that man’s life and I’m sure he will never forget what happened that day.

Please SHARE this story and pay it forward by doing something nice for someone today. Pass it along!!