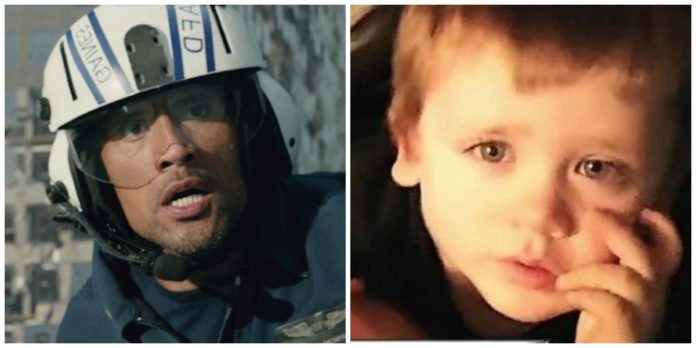 Did you have actor or actress role model when you were growing up? I never really emulated anyone in particular, but I did like to pretend I had cameras trained on me as I did stunts and other such things that are usually performed by trained professionals.

Jacob O’Connor says that it was Dwayne “The Rock” Johnson from the movie San Andreas who showed him the ropes that potentially ended up saving his little brothers life.

In San Andreas, The Rock stars as a rescue helicopter pilot who saves lives in California after a massive earthquake destroys much of the city. At one point he saves his on-screen daughter, the scene that came to Jacob’s mind.

It was around noon, Jacob sat on the couch at his grandmother’s house and proceeded to turn on a tv show. He engrossed himself in the program he was watching, so he didn’t acknowledge that anything was going on around him.

He was a few minutes into his relaxing position when he happened to glance over at the storm and screen doors. Why were they open? Jacob didn’t remember them being open when he first sat down.

Curiosity took its hold of his 10-year-old mind. He walked out of the doorway where green lush plants surrounded a deck serving as a platform for an above-ground swimming pool. Face down in the crystal blue ripples, he found his 2-year-old brother Dylan, motionless.

Jacob grabbed hold of Dylan, pulling him out of the water and laying him on his back. Then a split second memory of the action movie hero crossed through the elder O’Connor’s mind. He began doing compressions on the tiny chest to get him breathing again.

Their grandmother was in another part of the house getting a bed ready for Dylan’s nap when Jacob calmly walked in.

“Nana,” he said. “Um…Dylan opened the door and got in the back yard.”

She didn’t realize how unusually calm his demeanor was until she walked outside. Dylan was barely conscious and his eyes were partially rolled back into his head. He seemed all loopy as if heavily intoxicated.

She wasted no time rushing him to the hospital. When doctors looked the little boy over, they did not have encouraging news to report back to grandma. The first couple of hours were full of tension and stress.They said the chances of his full recovery were not looking good; they couldn’t promise he would be okay as he was face down in the water for almost a minute.

The doctors said the chances of his full recovery were not looking good; they couldn’t promise he would be okay as he was face down in the water for almost a minute.

A day later, the boy was released. Not only did he excel expectations and fully recover, he tried to get back in the pool as soon as he arrived at his grandmother’s house!

Their Nana would take no chances again. She installed double locks that are well out of small children’s grasp and she can lock them easily when she leaves the room. No more lone dips in the pool for Dylan!

The boys’ mom is also grateful for her little action hero’s quick movement to save his brother. She was at work at the time, so you can imagine how she felt when she received that call!

I am often surprised at how capable kids often are. I guess we should give them a little more credit sometimes! Thanks to our little Great Heroes!