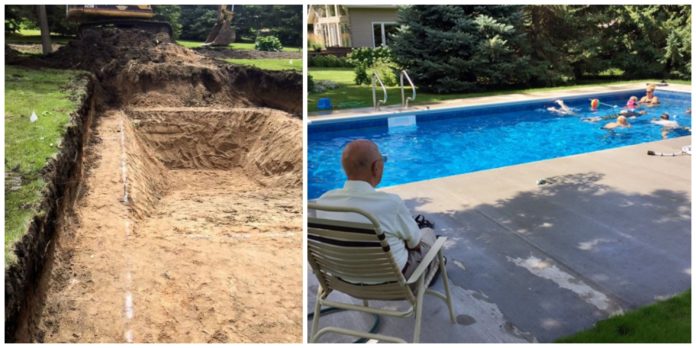 Keith Davison’s house became very quiet after his wife, Evy, passed away a couple months ago. She had been the most important thing in his life for many years so he went through a rough period of grieving.

Instead of shutting down and becoming bitter at the world, Keith felt he had to do something impactful. He looked outside and right there in his yard he saw an idea, or rather, he got an idea because of the lack of what he saw.

The neighborhood was missing something that should be in every community.

He remembered a company he used some forty years ago to build a swimming pool at his old house.

Custom Pools hooked Keith up with the man with the swimming hole knowledge, Kevin Mulvaney. Kevin helped Keith with everything from the initial planning and lay out to the paperwork and contracts to taking care of the water balance and general maintenance.

Kevin gathered his crew and weapons of mass construction and began to dig. Like a blink of an eye, okay…a little longer than that. About a month later a beautiful in-ground swimming pool sat glistening in Keith’s yard, the crisp blue reflections skittering through nearby tree leaves.

Kevin reflected on the period of time while they built Mr. Davison’s pool,

“Keith is a fantastic man, he’s just so pleasant to be around and it was just a real nice atmosphere, he even had pictures and shared stories of my dad [Virgin ‘Red’ Mulvaney] building their first pool.”

Keith, who is a retired judge, opened his pool midsummer, just in time for swimming. His pool is more than a cool swimming hole, though. It’s a community hotspot where kids from around the neighborhood come and have a great time. Keith enjoys nothing more than to hear the children scream and splash about.

His neighbors say that sometimes he sits outside and watched the kids play, and sometimes he just stays inside “doing his thing”. Being a judge, he is familiar with rules. His main rule is that if children come over to swim, they are accompanied by a parent or grandparent.

Otherwise, have a blast!

The adults in the neighborhood say that Keith has done more than just provide a place for the kids to play and cool off. They say that he has made himself an example by doing something purely out of the goodness of his heart. Kids see that and they reflect his behavior, learning to respect him and how to be kind to others.

But Keith is just happy that he can make others happy,

“You know it turned out to be a great idea, but it’s really not a big deal, I just thought it’d be something fun for them and bring some joy, and it has.”

Keith inspires me to be more active in my community. Granted, I won’t be building a pool outside my apartment anytime soon, but any kind action can benefit a person’s life in ways we may never foresee!