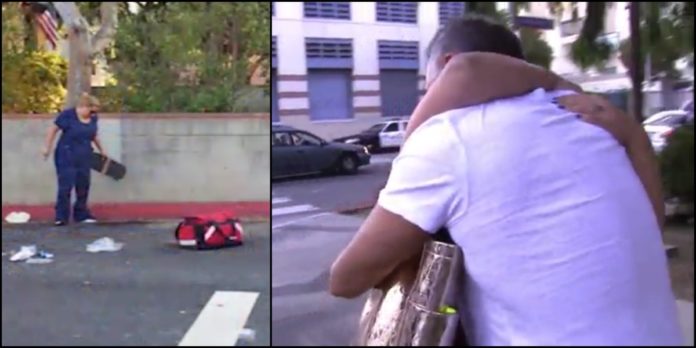 Nurse Lety Reynaga had the chance to meet the father of the young man she likely saved as he lay bleeding on the asphalt.

Dane Rivera was spending time riding his skateboard as he often had over the summer. This time, something unexpected happened. He lost control of his board, unable to regain control before the red and gray concrete wall met his face.

This is how Lety saw him as she drove past the intersection of Glenn Avenue. She immediately pulled her car over and rushed to his side. Dane was writhing in pain as blood streamed of his head, making his features almost completely unrecognizable.

She used her nursing skills to survey the situation, piecing together what must have happened and what his likely injuries were. Bleeding like that from his head, an unoccupied skateboard, and a very solid concrete wall. She knew a brain injury was highly likely.

By this time, another kindly citizen arrived to help out. Lety began to direct traffic around the scene to give Dane plenty of space to rest.

The other person wanted to get him out of the street, but Lety’s medical instincts kicked in. She knew they couldn’t just pick him up and move him. For all they knew, he could have a spinal injury as well and moving him would risk permanently crippling him.

Lety instructed her eager sidekick to let him lay there until EMT’s arrived. She knelt beside Dane and attempted to keep him still and calm. Understandably he moaned in response to the pain crawling through his body.

When emergency crews did finally arrive, they carefully placed him on a stretcher and took him away to a hospital. Lety left the scene, grateful she was in the right place to help the boy.

Amidst all the commotion, no one got the Good Samaritans name. Dane’s father, Burt Rivera, felt eager to meet and thank the person he heard had saved his son’s life, but no one knew who she was.

So he reached out to local news.

Burt got his wish when Lety’s sister saw a picture the local news station shared. Apparently, a neighbor at the scene of Dane’s accident took the picture to commemorate the unknown heroine.

When Lety’s sister saw it, she encouraged her to get in touch with the family; they would want to know the person who rescued their son.

Her sister was correct because their meeting brought hugs and tears from both sides. Burt says he’s praying for his son’s recovery and hopes that one day Dane can also meet the guardian angel who saved him.

Dane is still in a medically induced coma, but doctors have seen a slight recovery in his brain activity.

If you are thankful Lety took responsibility to save the boy and give him a second chance at life, SHARE this story with everyone!