That brought the vehicle to a stop and officers approached swiftly and carefully to detain the suspect. However, when Deputy Brownlee tried to make the arrest, the suspect tried to fight him. He succeeded in gaining control of the deputy’s service pistol and shot the officer three times, killing him.

Several years later, Tanner heard that his dad’s Dodge Charger squad car was going up for auction. It would be sold at the annual charity event called C.O.P.S. (Concerns of Police Survivors). It’s a benefit auction to raise money for families who have lost a loved one while they were on duty. 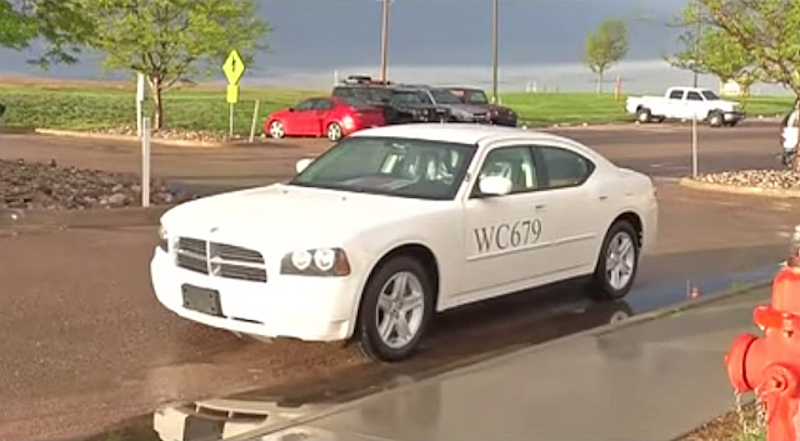 Tanner and his little brother Chase came up with a plan. They would raise money to buy their dads car at the auction. They had some time so if they worked hard enough, they could maybe get the roughly $12,000 the car was worth in time for the auction.

Unfortunately, when the auction did finally roll around, Tanner was only able to save a quarter of the amount he needed. With high hopes and fingers crossed, he walked into the auction to see what might happen.

Just as he expected, but hoped wouldn’t happen, the car quickly jumped up in price and before long it was at $20,000.

Finally, it ended with a local rancher at $60,000. Tanner was just happy that the car was going to a local and would be taken care of and appreciated. The rancher walked up to the front and took the keys, but he didn’t walk out with them.

Instead, the man turned around and held out the keys to Tanner saying, “Here’s your car.”

Tanner was immediately in shock. With his mind wheeling, he stood and hugged the rancher, Steve Wells. It was an amazing end to the story of a local hero who died protecting his community, then his family received an incredible gift that meant more to them than anyone.

Steve Wells said that handing the keys to the young man who rightfully deserved them was an honor he was blessed to be able to do. He told CBS4 a section of his 32,000-acre ranch recently cashed in from some oil drilling and he has been able to use that money to bless many others with donations.

This was no exception. As soon as he heard Tanner’s story, he knew he wanted to make this happen for the boy. In a way, this opportunity was perfect for “returning the favor” for the gift he received many years ago when he was adopted and given a new life.

“That was a moment that, for me, meant everything,” he said.

That kind of generosity is incredible and rare! What an incredible gift to come from a terrible tragedy. Be sure to FOLLOW Great Heros for more!